The smallest structural and functional unit of the kidney is the nephron. Each kidney contains about 1 million nephrons.

The nephrons are a tubular system of pipes/ductsthat is separate from the blood vessels. After filtration fluid from the blood supplypasses into the nephrons. This filtrate after passing through the tubular system to the ureters will become the urine This filtrate  as it passes through the nephrons tubules will receive  additional water, salts, and waste products so its composition changes until the urine finally empties into the bladder to be excreted.

Each nephron is divided into the following sections:

The glomerulus is located in the first section of a nephron, where the fluid from the blood supply delivered via a network of capillaries is transferred into the nephrons due to the hydrostatic pressure difference between the capillaries (high pressure) and the glomerulus (low pressure). The glomerulus is the name given to the capillary network and nephron capsule encircling the glomerulus is referred to as Bowman’s capsule. The glomerulus is always located in the renal cortex. Fluid is forced out of the capillaries and into Bowman’s capsule by the hydrostatic pressure referred to above. This filtrate, then enters the proximal tubules. From here it passesdown the loop of Henle located in the renal medulla. The loop of Henle is divided histologically into two sections, the descending and the ascending loops. From the ascending loop of Henle, the filtrate passes into the distal tubules. The final section of the nephron is the collecting duct and A single collection duct will collect pre-urine from several nephrons.  The collecting ducts lead the filtrate into kidney papilla located in the renal medulla. From the kidney papilla the urine passes into the renal pelvis and from there via the ureter into the bladder.

Histologically there are two types of nephrons – cortical nephrons and juxtamedullary nephrons. 85% of the nephrons are cortical and are mostly located in the cortex and only a small portion of the loop of Henle is protruding into the medulla. The juxtamedullary nephrons (15% of nephrons) has a long loop of  Henle that runs deep into the medulla. It is by these deep loops of Henle the kidneys are able to make concentrated urine, i.e. urine comprising relatively little water and high concentrations ofsalts and waste products. 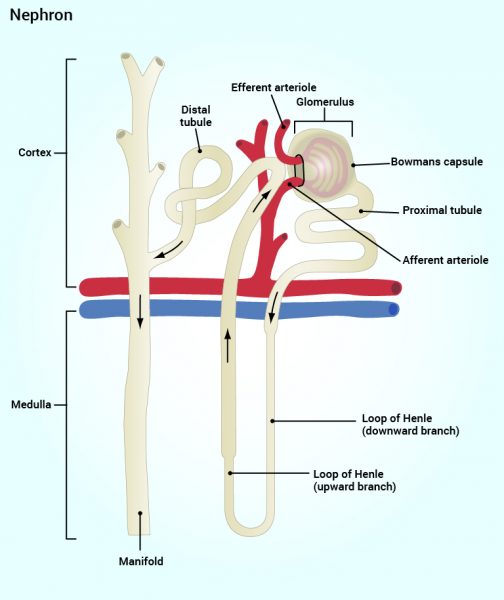