As described above, one of the functions of the hormone aldosterone is to increase the secretion of potassium. In addition, ammonium (nitrogen waste), various acids and creatinine (nitrogen waste) and a variety of other biochemical products and especially drugs are also secreted into the tubules.

Through tubular secretion the kidneys control and regulate the renal elimination of waste, potassium and control the blood pH (see section below).

The kidneys are able to control the concentration of urine according to the body’s needs thus creating dilute or concentrated urine.

When you are sipping a bottle of water steadily throughout the day, you will have a recurrent need to urinate. And every time you do, you will see that your urine is clear and light in colour. At other times, if you do not drink over several hours, the colour of the urine is significantly darker and may havean odour.

In the first case, you have a dilute urine – a urine containing little salt and waste in relation to water quantity. In the latter case, the body needs to conserve water because you are continually losing water through the skin and breath, the kidneys are working to reabsorb most of the water in the filtrate. therefore producing a concentrated urine – a urine with many solutes, with the least possible water.

The starting point to create thin or concentrated urine is described above under tubular reabsorption. When the filtrate arrives at the distal tubules, most of the water and salts are already reabsorbed and the filtrate is already more dilute. than when first filtered.

However, if circumstances require the kidneys to make a concentrated urine, that is, that the body is in a state where the fluid levelsare relatively low and salt concentration is relatively high, the pituitary gland secretes anti-diuretic hormone (ADH) which acts on the collecting ducts of the nephrons and increases the uptake of water. Increased water absorption means that the filtrate becomes more and more concentrated as long as it runs through the collecting ducts on the way to the medulla (Fig. 10). Accordingly, the kidneys produce a concentrated urine. ADH is secreted from the pituitary gland only when the salt concentration in the blood is high (exceeds a physiological concentration).

In this way, ADH, regulates the concentration of urine producing either dilute or concentrated urine depending on the water and salt balance in the body. 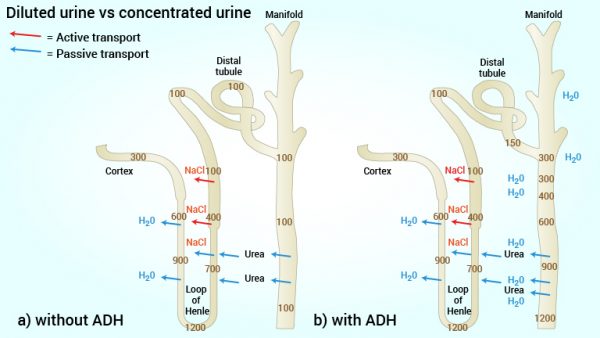