Glomerular filtration rate (GFR) indicates the volume of filtrate produced in the kidney per minute (ie the volume of fluid that ends up in the nephrons per minute). Normally, this volume is 120-125 ml per minute.

Maintaining adequate GFR is essential for the kidneys to be able to do its job. If the GFR decreases, the body will not be able to excrete excess fluid, salts and waste products nor could it adjust the pH when required. On the other hand, if the GFR is abnormally high, there is the risk of excessive loss of salts and water. For these reasons, GFR is carefully regulated by two renal mechanisms:

Before we continue with the explanation of the regulatory mechanisms of GFR, it is important to emphasize the following point: since the hydrostatic pressure in the glomerulus is one of the three factors (see above) that affect glomerular filtration, two of which stay relatively constant, the body’s blood pressure is the major factor regulating GFR. In other words, the regulation of GFR and blood pressure are in many ways two sides of the same coin. This also means that any factor affecting the blood pressure, i.e. the autonomic nervous system, will also affect GFR.

The internal mechanism of the regulation of GFR is called renal auto-regulation. When GFR decreases, for example due to low systemic blood pressure, two inner mechanisms take effect:

The tubuloglomerular feedback mechanism: This is controlled by the macula densa. At low blood pressure only relatively small amounts of filtrate pass into the nephrons due to low GFR. This means (as explained below) that there will be little sodium in the ascending part in the Loop of Henle. This inhibits ATP release from the macula densa which triggers vasodilation in the afferent arteriole of the glomerulus. Accordingly the hydrostatic pressure exceeds slightly, and thus the GFR increases.

The external mechanisms that regulate GFR are intiated by the nervous and endocrine systems. These mechanisms are the same mechanisms regulating systemic blood pressure (see the e-compendium on cardiovascular physiology). By decreasing blood pressure, GFR decreases. The following mechanisms will therefore take effect:

2) activate vasoconstriction of the arterioles of the body.

These mechanismstogether will increase the blood pressure. Sympathetic nerves will also directly stimulate the juxtaglomerular cells, with the consequence that they release renin. Renin increases the level of angiotensin II (the renin-angiotensin mechanism) which itself provides vasoconstriction and stimulates adrenal secretion of aldosterone. Aldosterone acts on the distal tubules cells and increases the absorption of sodium and thus water. Therefore blood volume increases – and blood pressure increases.

In the proximal tubules, which is the first branch of the nephrons after the glomerulus, approximately 65% of all sodium is immediately reabsorbed. This takes place by active transport, and the cells in this region contain large numbers of mitochondria because of the large ATP requirement for this reabsorption process to take place. When sodium ions are reabsorbed, chlorine ions follow due to electrostatic attraction. This large ion reuptake means (as usual) that the water follows. In other words, approximately 65% of the water in the filtrate is reabsorbed immediately in the proximal tubule area. In addition to water and salts, there are also sugars and amino acids in the filtrate. These are usually 100% reabsorbed in the proximal tubules. The same applies for bicarbonate (HCO3). Uric acid and urea (wastes) are also reabsorbed here, but these are secreted back into the tubules further down the nephron.

In the ascending Loop of Henle the conditions are somewhat reversed. The wall of nephrons here are impermeable to water. At the same time this part of the nephrons are permeable to salt, and both sodium and chloride are reabsorbed from the nephrons into the medulla by both passive and active transport. The consequence is that the concentration of the filtrate in the nephrons becomes lower (as only salt  is reabsorbed). Thus, the overall effect of the Loop of Henle is that we have reabsorption of both water (in the descending loop) and salts (in the ascending loop) such that the filtrate arriving the distal tubule is more dilute than when first filtered in the glomerulus, and contains only 10% of the filtered sodium and chlorine, and about 25% of water. 75% of the water reabsorbed at this stage, and the residual filtrate is more dilute than what arrived in the nephrons.

In the distal tubules and collecting ducts, reabsorption is regulated by hormones according to the body’s needs. The action of these hormones will be described next. 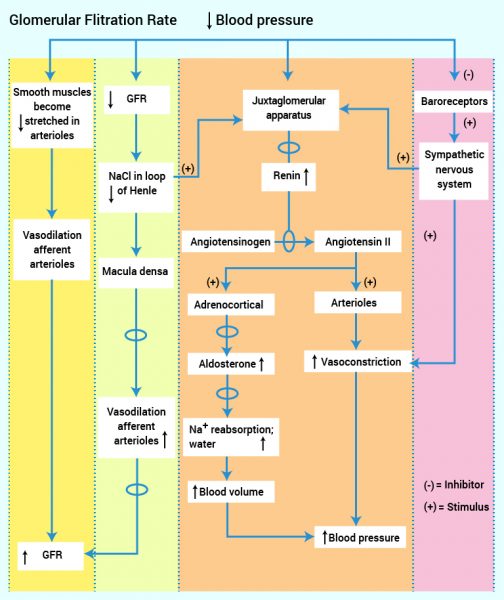